Cordillera Blanca.- It is a mountain range located in Peru and that is part of the Andes mountain range considered “the Peruvian capital of mountaineering”, has the highest and most beautiful peaks of Peru among its most famous peaks, the snowy Huascaran (6,768 m), Chopicalqui (6,354 m) Huandoy (6,000 m) and the Alpamayo (5,947m); What constitutes, the highest tropical mountain range in the world, has an extension of 180 km in length with 663 glaciers, 269 emerald lagoons and 41 rivers, in addition to 33 archaeological sites. The flora and fauna are impressive in the mountains, the Raimondi puya, ancient quenual and cactus forests. It has an infinite number of tourist circuits of Trekking, rock and ice climbing, horseback riding, mountain biking, etc.

Huascaran National Park.- It was created in 1975, with the aim of preserving the animal and plant wealth of this place and in 1985, it was declared a World Heritage Site and Biosphere Reserve by UNESCO. It is located in the Cordillera Blanca, which is in turn the highest tropical mountain range in the world because it is closer than others in the equator. The Park is 158 km long from south to north and 20 km wide; 340 thousand hectares. It has 663 glaciers, 27 of which exceed 6 thousand m.a.s.l. and 200 thousand. The estimated volume of these glaciers is 22, 458 cubic km, has 296 lagoons with 28.14 km2 of surface and 435 million cubic meters of water, has three basins: Río Santa, Pativilca and Marañón. It comprises part of the provinces of Recuay, Huaraz, Carhuaz, Yungay, Huaylas, Bolognesi, Huari, Asunción, Piscobamba and Pomabamba.

Callejón de Huaylas.- With an extension of 150 km, formed by the Cordillera Blanca and the Cordillera Negra, divided by the Santa River that runs through the provinces of Recuay, Huaraz, Carhuaz, Yungay and Huaylas. A valley dedicated to agriculture and livestock, with picturesque villages and very friendly people. 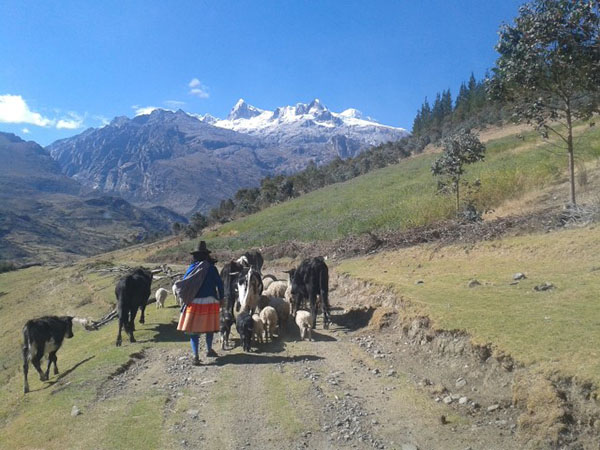